I had a guest on sunday and we usually sit there talking all day. Even if you're sitting all day you need an occasional snack to gorge on. My eyes were set on the Rillette from Modernist Cuisine. 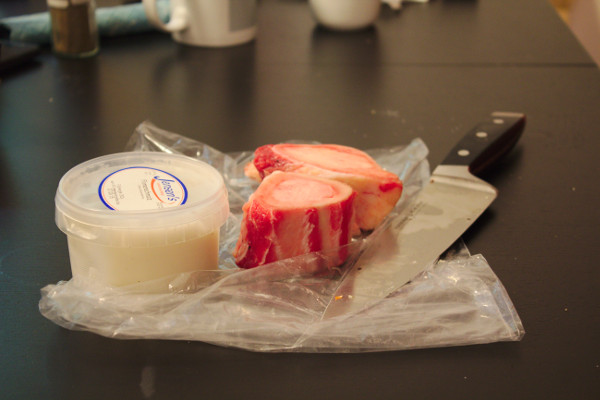 So on saturday I went to the butcher. I explained to him that I wanted beef shank. After I assured him that I wanted to cook the meet for at least an hour, he handed me two very nice slices ox shank. MC calls for molten tallow to be added to a fluid gel. The first problem was to find tallow, the second problem was apparent after I added the substitute - lard in this case - to the "liquid gel".
The gel wasn't liquid at all, it was mostly grainy. Sadly this resulted in a grainy texture of the liquid gel/lard mixture. I chilled the meat overnight, which meant that the meat wasn't quite tender enough to give nice rillette. The taste however is impeccable. And I would note that you really need to add a lot of pepper, since the lard seems to absorb it easily.